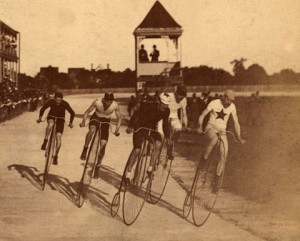 The penny farthing or high wheel, high wheeler or ordinary is a cycle with a large front wheel and small rear wheel. This term Penny Farthing comes from the British penny (1d) and Farthing (1/4d) coins of the early and mid-20 century.

The heyday of the penny farthing was between 1880 and 1890 and the majority of museum pieces are from this time. The first Penny Farthings were made about 1869 when the construction of large wheels were made possible by the invention of the wire spoke tension wheel. They were developed until in 1880 Meyer produced what we would recognise of today as the classic high bicycle design. The life span of the penny farthing was relatively short lived with the development of the safety bicycle in the 1890s and lingered on only in small areas until the 1920’s

Although during this period, they were dominant. Not only were they magnificent things to see ridden, but they were also fast and dangerous. With the exception of the railways, there was nothing faster on the roads.

There has been a bit of revolution in the Penny Farthing racing scene over the last few years with the Evendale event in Australia and world championships since 1986. Europe now has its own championship races held in Belgium every year and the UK has had the Pennies in the Park races since 2012. Eugène Meyer of Paris, France is now regarded as the father of the high bicycle by the International Cycling History Conference in place of James Starley. Meyer patented a wire-spoke tension wheel with individually adjustable spokes in 1869. They were called “spider” wheels in Britain when introduced there. Meyer produced a classic high bicycle design during the 1880s.

James Starley in Coventry added the tangent spokes and the mounting step to his famous bicycle named “Ariel”. He is regarded as the father of the British cycling industry. Ball bearings, solid rubber tires and hollow-section steel frames became standard, reducing weight and making the ride much smoother.

Penny-farthing bicycles are dangerous due to the risk of headers (taking a fall over the handlebars head-first). Makers developed “moustache” handlebars, allowing the rider’s knees to clear them, “Whatton” handlebars that wrapped around behind the legs, and ultimately (though too late, after development of the safety bicycle), the American “Eagle” and “Star” bicycles, whose large and small wheels were reversed. This prevented headers, but left the danger of being thrown backwards when riding uphill.

Other attempts included moving the seat rearward and driving the wheel by levers or treadles, as in the “Xtraordinary” and “Facile”, or gears, by chain as in the “Kangaroo” or at the hub, as in the “Crypto”; another option was to move the seat well back, as in the “Rational”.

Even so, bicycling remained the province of the urban well-to-do, and mainly men, until the 1890s, and was a salient example of conspicuous consumption.